the effect of salacious troubadours on the state of Denmark

You know how it goes: you’re the nineteen-year-old daughter of the Duke of Crete, you’ve been married off to the bastard son of the King of Denmark, and you’re pregnant with your second child. Everyone else in the court is a Catholic. What’s a girl to do but seek solace in romantic poetry? What’s her husband to do but spend 100 gold that he doesn’t have to buy it for her? But wait – what might the consequences be? 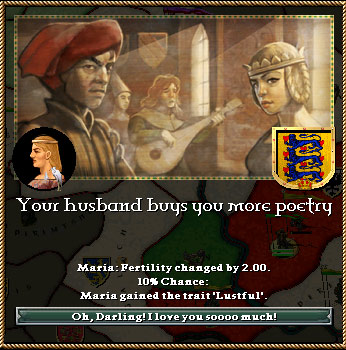 Sorry. I hadn’t ever seen this CK event before and I was highly amused. I’ve seen the one where your wife demands the latest fashions many times, but this is entirely new. It’s 1183; this event triggered just after capturing Kiev, visible through the transparency, which was the first of my provinces to even have the Romantic Poetry advance. Maria Leofricson nee Paraspondylos picked up on the new development before the campaign was even over; I granted her husband the county of Chernigov, on the outskirts of Kiev, so that she won’t have to endure the uncultured royal court at Slesvig, where the embalmed foot of her dead mother-in-law* is what passes for avant-garde entertainment.

*Blessed Etaín Ui Mórdha (?-1168); daughter of the Duke of Meath, probably born Dublin circa 1144; convent education; married Aethelwine I of Denmark and Sweden; after being taken in adultery, made sincere repentance and dedicated herself to a life of prayer, chastity and good works, bearing Aethelwine two legitimate sons, both of whom were dedicated to ecclesiastical careers. A well-read theologian and politically active courtier, she expired at a young age of a fever. Her illegitimate son Cúán was later acknowledged by Aethelwine for his mother’s sake. A relic of her foot is kept at Kaliningrad.

This entry was posted in videogames and tagged Crusader Kings, poetry, romance. Bookmark the permalink.