Best Critical Writing of IF Comp 2014 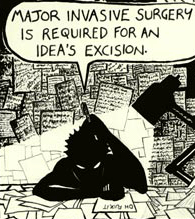 A writer of comp reviews, around their thirtieth game.

One of the reasons I like IF Comp is that it prompts an annual Great Flourishing of IF criticism. Outside comp season, writing about IF can be a lonely task: but in Comp season everybody is paying attention to the same corpus, writing about it, hunting around to see what other people thought. Every year critics emerge whom I’ve never heard of before, yet are a) solidly conversant in IF and b) insightful, articulate, and fun to read. (Many of them vanish into the woodwork, never to emerge again, and I am sad. Then sometimes show up a decade later, more awesome than before.) We also have a stable of people who have been thinking and writing more or less frequently about this shit since before I could get served. (And I grew up in rural Shropshire, where they’ll serve a badger a double Scotch if it can reach the bar.)

Here are some of my personal favourites. (There are many, many more solid reviews: I compiled a more complete list of reviewers here.)

Victor Gijsbers, To judge or not to judge:

Sharing your pain has nothing to do with art. (Pain can fuel art, but the pain must then be transformed into something that is no longer the artist’s pain.) But I am not enough of a Nietzschean to claim that art is the ultimate goal, and that human suffering is insignificant compared to it.

I am not entirely on board with Victor – for myself, at least, I don’t think it’s either possible or desirable to wholly eliminate personal tastes and subjective experience either from judging or criticism, I’m somewhat more sceptical about crit (or art) as a for-the-ages Schillerian enterprise, and my feelings about death-of-the-author are very mixed – but this is a pellucid look at the incommensurable demands of responding to a work seriously.

Krypteia refers to a Spartan practice that isn’t really very well understood. (The word means “hidden things”, which may explain why detailed descriptions are not forthcoming.) It was possibly a rite of passage for young soldiers, in which they lived alone off the land, sent away from their community before being reintegrated into it in a new and more responsible role. It was possibly a time when they were encouraged to attack the helots, the essentially slave population which provided most of Sparta’s agricultural labor, without repercussion.

Emily is a high-level multi-classed classicist/gamesmith, and when her domains of expertise overlap it is a glorious thing.

Harry Giles, author of Raik, on his relationship with Scots. (Not specifically about IF, but an interesting artist’s statement.)

(If that makes your brain run out of your ears, it’s also available in standard English, but how can you resist any text that includes the phrase ‘upbiggit performativity’?)

Jenni Polodna is the best person, and breaks out some Hard Truths on One Night Stand:

If you drink enough to fuck a stranger without remembering it, your whole next morning, if not the entire next day, are going to be colored by that.  You can’t toss off one glib line about having one hell of a hangover and then go about your busy day of being grossed out by someone’s disgusting apartment and turned on by your own thighs as though nothing had happened.

Jenni’s best known for being funny as hell, but she’s also extraordinarily good at cutting to the heart of things without prevaricating or being a dick about it, which is pretty much the greatest quality a reviewer can possess.

In the competitive category of snarky play-by-plays not by Jenni Polodna, the one I appreciated most was The Rest of Your Mice on The Black Lily:

I track her down and have a little trouble figuring out what to do next.  Realistically I would just talk to her (“Hey, are your eyebrows okay?  Do you need a doctor?”) but the game won’t let me.  After some fumbling I end up back in my living room, with nothing to show for the encounter.  I can only assume this whole game is leading up to the part where I open my secret closet where I keep my skin suits that I stitched out of all my lady friends, but I wish it would just get on with it.

Katherine Morayati lays it down on Caroline:

In short, Caroline does not seem like a real person who exists in the real world, which made it somewhat hard to believe anything about her story. There’s no “there” there. As it turns out, this is a real trait of people who recruit for cults — pleasant agreeability, concealing hollowness — which might lend Caroline a bit of accidental plausibility, but that requires substantial benefit of the doubt that the prose does not inspire. In particular, very little of the narration indicates that the PC is attracted at all to Caroline, certainly not enough to join her creepy Jesus cult on date two.

Again, this stabs to the heart without apologising for it. Katherine has zero interest in sugar-coating, but she doesn’t revel in cruelty. I am envious.

PaulS tackles choose-your-own-AFGNCAAP in Creatures Such As We:

For my own part, I found it very hard to make sense of the game unless I made the protagonist a straight woman. Perhaps it was me, but that’s how she felt. And that’s not a problem at all. I’m really delighted to play a game in that role; but the promise that I can choose not to seemed to me not to be made good, and I think it’s a questionable promise, even when it’s made from entirely laudable motives.

For an entertaining read, I thoroughly recommend JoshuaH’s enTwined review IF Is Dead, Long Live IF, in which he discourses with his decade-older persona:

As the above suggests, in-depth insight is not the objective here – these are more quick-reaction pieces than full-on reviews, but sometimes those get at the important things more surely.

Finally, to toot my own horn a little, there’s the mini-tradition on the intfiction forum of posting reviews as formal poetry. Sometimes this is just a good excuse to be funny, but my favourites are those where the form’s restrictions pare away the quibbling and foreground the emotional response. Here’s Harry Giles again:

She takes my hand, but she’s not real.
The story leaves a bad taste in my mouth.
She leads with missionary zeal:

and takes my hand, but she’s not real.
The writing’s nothing that appeals
and much I could have done without.

She takes my hand, but she’s not real.
The story leaves a bad taste in my mouth.

This entry was posted in interactive fiction, review and tagged if comp, IF Comp 2014. Bookmark the permalink.

1 Response to Best Critical Writing of IF Comp 2014