This War of Mine

Zlata has died, shot by a sniper while returning from a scavenging run. Zlata, the cheerful one, Zlata who kept everybody’s spirits up. Everybody’s messed up about it. It’s getting colder; even with the stove the temperature’s hovering around 4°C. There’s no food left. Everyone’s cold and sad and hungry, but Marin has it the worst. Terminally ill and depressed, he can’t do much more than hunker in bed.

Anton is the useless one. He’s too old for this. A mathematics professor before the siege started, he has no relevant skills. The group let him in anyway; another pair of eyes on guard duty, another mouth to feed. He’s holding up the best of anyone because he’s too frail to be an effective scavenger, and has thus avoided injury. ‘Best’ still means sick, hungry, tired and sad. I notice a new option, and soon he’s crouched down beside Marin, trying to talk his spirits up.

It doesn’t work. The next day Marin’s ‘depressed’ condition has declined into ‘broken’, the first time I’ve seen that ominous word used. Marin won’t respond to commands, won’t even get into bed. When we scrounge up some pitiful scraps, he has to be fed and medicated by someone else. Another scavenger is lost, and now it’s just Anton and Marin. Anton goes out, uselessly, to scavenge; when he returns in the morning, Marin has killed himself. 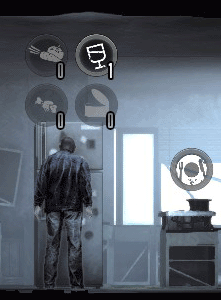 Anton hangs on a few more desparate days, slowly sliding downwards. At one point, some neighbours come around with a gift to thank the group for an earlier kindness: a bottle of vodka. Anton can only accept it. Right, I think, if ever there was a time to get wasted. But Anton doesn’t drink. (Perhaps he’s Muslim; This War is intentionally vague about ethnicity, about which side is which.)

He’s too tired and sick to even try to scavenge; huddled in bed in a freezing building, it takes him a couple more days to starve to death.

In general, when shit starts going downhill in a game, I stick around for a certain length of time and then bail – go to a save or just restart. The main thing that determines how long I stick around is how interesting failure is at each point. There’s a sequence of crisis-points: the key ones are First Irreparable Damage, and Doom Assured.

The pacing after Doom Assured varies a lot. In Dwarf Fortress, the crisis-point of failure is often new and unexpected, but after the point when you know you’re doomed, it tends to be slow and drawn-out, a slow, tortuous spiral of failed production and  tantrums. Don’t Starve, the Lemony Snicket to DF’s Edward Gorey, is a lot more user-friendly about your doom: until you actually keel over there’s generally some sliver of hope.

Getting me to stick with a game after Irreparable Damage takes a certain level of investment. I have to trust that the damage is going to make things more interesting, rather than just crappier. (This is an attitude trained by innumerable games that are only interested in success mode.) In XCOM I can tolerate losing one high-level squaddie, but lose two or three in rapid succession and I’m going back to a save; I have a certain amount of narrative investment in the characters, but it’s not encouraged that much.

Getting me to stick with a game after Doom Assured is another matter. There’s rarely any fun about Doom Assured. Your choices are steadily, predictably stripped away from you; often things stagnate at a point where everything’s totally crappy but the final blow is yet to fall. You want to stick around until you know how things are going to go, then bail.

Which was the case for This War of Mine. From the first Irreversible Damage point, when my best scavenger was killed – cornered in a cellar, kicked to death by some guys he was trying to steal from – I wanted out. But that felt like the wrong response. My charges – civilians – couldn’t get out. They had names and faces, they weren’t randomly-generated mooks. I owed them, or I owed the story. I stuck it out even when I was past the point of no return. I stuck it out as they slowly trudged into the dark.

There have long been three books that I’ve really wanted to see made into simuation-y games: Robert Graves‘ WWI memoir Good-Bye To All That, Primo Levi’s Auschwitz memoir If This Is A Man, and Colin Turnbull’s doubtful ethnographies The Forest People and The Mountain People. Because games are very good at representing systems, and those are all accounts of systems. This War of Mine is among the closest things I’ve seen to that.

The other day I was talking to Marius Müller about season 2 of Telltale’s The Walking Dead; he said, rough paraphrase, ‘I won’t replay it, because it feels like betraying the characters.’ (Relevant reading: Cara Ellison on consent and rejection in Creatures Such as We.) Investment in character is, on some important level, investment in a linear story. There is a mode of caring about a story that involves anointing a canon, which is – I think – a kind of willing to reality. Real people don’t have different life-stories that we can adjust to suit our preferences or curiosity.

This War Of Mine has a familiar aesthetic, what I’m going to call Slavic Grit. It’s, well, mostly it’s blue-lit. In visual art, when you want emotional warmth, intimacy, comfort, the straightforward choice is to go for orange light, soft focus, warm saturated tones. Slavic Grit is the opposite of that. Slavic Grit’s palette is shifted towards blue, washed-out lighting, suggesting emotional distance, darkness and physical cold; its texture is sharp-focused or grainy, emphasizing texture rather than smoothing it. It lends itself well to harsh-faced character actors, grimly-set faces lined with suffering, bulky worn-down clothing.

This is about the perfect tone for This War Of Mine, but the problem here is that getting Grittiness mixed up with Realism has been kind of a big thing for the past decade or so. Freakin’ Arrow uses the blue-shifted detailed-texture approach, so the authentic chops of the style are perhaps a shade eroded.

And yet, this is a game which made me feel horribly conficted about stealing from the vulnerable, which successfully conveyed its moments of tenderness and support. This, also, in spite of less-than-amazing writing.

This War‘s mechanic is firmly rooted in the survival-horror subgenre of collect/construct/conquer games – a genre which, let’s not fuck around here, is mostly zombie-related. There is, if not a direct debt, then a strong similarity to abstracted zombie-apocalypse management games like the The Last Stand and Rebuild series. The crafting / furniture-placement system solidly places it in a post-Minecraft tradition – the last thing I played in this vein was Terraria, a pixel-art game where you wear goofy costumes and fuck up Lovecraftian monsters with lightsabres. This War doesn’t do anything new to accomplish its effects: its power is all a matter of balance, pacing,  aesthetics, delivery.

May we all do so well.

This entry was posted in videogames and tagged this war of mine. Bookmark the permalink.

1 Response to This War of Mine