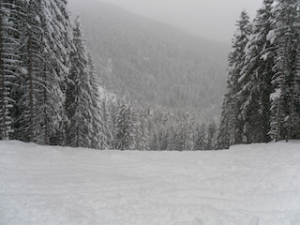 Story: This is going for a noir feel – first-person viewpoint, rumpled detective, certain stripe of beautiful woman. The protagonist, a newly-ex-detective, is invited to a remote mountain chalet, whereupon (as always happens when a detective goes to a mountain chalet) there is a murder and the group are cut off by bad weather.

Although we’re following a fairly standard script, the delivery is decidedly uneven, and left me quite unsure about what was going on with a lot of things: I had the impression that the author was skipping important parts of the storytelling in places. The plot is divided into conversations where a lot of information gets dumped on you all at once, and exploration sections where things move much more slowly and it’s not clear what you should be trying to do.

I caught some hints of things that seemed oddly out-of-place, which taken together might suggest that some of the principals – Valentine and the protagonist, at any rate – might be vampires or some similar sunlight-averse, immortal monster. If so, I didn’t get far enough into the plot to either confirm it or to figure out why the narrative viewpoint was being so coy about it.

The problem about this approach – for an incongruity in the story to provide a clue about Something Strange Going On, it helps for the rest of the story to hang together. And there’s so much that’s not quite clear in this story – the guests have all just shown up, but now they need alibis; I apparently didn’t report the car crash to anyone, but it counts as an alibi; Val showed up at the scene immediately after the crash, but that doesn’t count as an alibi either – that isolating the bits that were meant to be incongruous and weird was difficult.

So: there is a story, it’s the central motivation of the game, but it has real trouble with presentation and delivery. 2.

Writing:  Noir is a challenging style to write in: it requires a certain understated, casual yet visible assurance, both with language and with treatment of the content. A noir narrator has to posture without appearing to posture, in other words. A Long Drink goes a little over the top:

>x val
The first thing I noticed were the dark green eyes, clear even driving down a street with no lights. She looked to be in her thirties, but she could have been three hundred for all I knew. Her face shone in the moonlight, pale and beautiful and unnatural. She was wearing too-red lipstick, which gave her the look of a Venetian mask. Wavy auburn hair framed a face I wouldn’t have kicked out of bed for eating crackers.

The femme fatale is a trope very much of its time, and just transplanting it to a modern setting is going to feel weird. There are some authors who could pull off that juxtaposition between ‘pale beautiful unnatural mask’ and ‘wouldn’t kick out of bed for eating crackers’ – Robb Sherwin springs to mind – but here it just feels like two kinda-uncomfortable tropes that don’t quite belong in the same paragraph.

The car was currently lying at the bottom of a cliff on its side. Above me, I could dimly see the light of the moon, mottled by the snow on the passenger side windows. The windshield in front of me showed nothing but evergreen forest, extending into the darkness.

That’s a strongly-imagined picture when you get down to it, but the phrasing is doing it no favours. Overprecision is one issue: ‘currently’ is an awkward word, and superfluous here. There’s a lot of relative direction – the light of the moon is above me, the windshield in front, which are kind of the default places you’d expect them to be. As is often the case with overprecise writing, it’s also over-specific about uncertain information – there’s a certain amount of ‘it looked like X’ rather than just saying ‘X’.

And the viewpoint tone isn’t consistent: you’re meant to feel that the protagonist is a hard-drinking grumbly detective type, and then there’s a lot of standard-IFese descriptive language most of the time, occasionally wandering into something like this:

There was something decidedly autumn about the decoration of the room, heavy curtains the colour of cherries, and luxurious golden bed linens that looked like smooth parchment on the king-size bed.

That’s not a bad image, but it seems out of character for the protagonist – particularly since, as a first-person narrator, you’d expect his viewpoint to come through more, as indeed at other points it does. (A hard-boiled detective who was also a home-decor buff would be fine – indeed, there’s some precedent in Primo Varicella – but I don’t think that’s the idea here.)

A straightforward 2 – the writing isn’t atrocious, but it is an active drag on the thing. It’s trying for relatively ambitious effects and falling short –

Puzzles: The first puzzle – about escaping the car – is a reasonable, workmanlike exercise; the next one I found, dealing with a safe, is really a lock-and-key affair: if you’ve found the bit of paper with the combination then it opens automatically. This doesn’t strike me as a game very invested in puzzles, except as a way of pacing story. Overall, I think this is a 2 – the puzzles fall squarely into the orthodox-IF bracket, but they’re not really a big deal for the game. If this was intended as a piece of forensic-IF, about carefully searching through a big house in order to turn up clues, it’s not implemented strongly enough for that to come across.

Theme: The sunlight thing is flagged up as significant early on in the game, but we don’t really learn why – this is one of the possibly-vampire clues I mentioned. Probably a 2.

Technical: There are a lot of standard errors: actions described in room descriptions, unmentioned exits, missing and undescribed synonyms and scenery. The missing scenery is particularly troublesome given that you’re meant to be doing crime-scene investigation; there’s a valise which seems significant but which I couldn’t refer to at all.

For instance, there’s a bit where you’re snagged in a seat-belt in a crashed car and can’t do anything until you unbuckle yourself. That’s fine – but in that circumstance you really need to have a lot of synonyms for ‘unbuckle myself.’

>open belt
The seat belt held me firmly in place in what was now the bottom of the upturned_car. I wasn’t going to be able to see or do much of anything until I unbuckled myself.

>unbuckle belt
The seat belt held me firmly in place in what was now the bottom of the upturned_car. I wasn’t going to be able to see or do much of anything until I unbuckled myself.

>unbuckle seatbelt
The seat belt held me firmly in place in what was now the bottom of the upturned_car. I wasn’t going to be able to see or do much of anything until I unbuckled myself.

>unbuckle seat belt
I wrestled with the jammed seat belt for a moment, then managed to undo it, falling a few inches down against the driver door once the chest belt was free.

The author’s using BENT without renaming objects appropriately, but that’s not the major problem here.

In general, implementation does not inspire confidence. The first time I played I managed to trigger some plot events in the wrong order – Val never met me at the body, the three guests never showed up, and the next I saw of Val was in a weirdly-undescribed bedroom in which sleeping never advanced the plot. The second time around things triggered more as they should have (I think because I spoke to Val in the lobby before finding the corpse?) but after the cop showed up and interviewed Val I couldn’t make anything advance, nor did I have much idea about next reasonable steps.

Overall: This feels as though the author bit off rather more than they could chew: there are a lot of NPCs and rooms, the plot goes through multiple stages, and as a result a great deal of things feel neglected.  2.

This entry was posted in interactive fiction, parser-based, review and tagged parsercomp. Bookmark the permalink.

1 Response to ParserComp: A Long Drink