A Year Without Zombies 4: April Is The Ghoulest Month

A crowd flowed over London Bridge, so many,
I had not thought death had undone so many.

(For 2015, I am trying to avoid playing any games or consuming any static media with zombies in them. My reasons, and other fun things like ‘what exactly counts as a zombie?’, are explained here.)

A Wizard’s Lizard. Picked up in a roguelike Humble Bundle after friend of a friend recommended Road Not Taken. Time to zombie: 3 minutes. 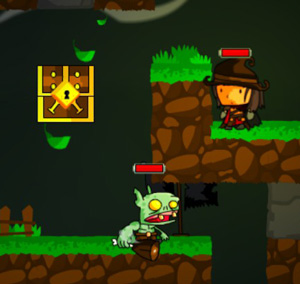 Zombie goblin: unlike a regular goblin in that it’s green, has beady eyes and is carrying meat.

Vertical Drop Heroes HD.  (No relation to Power Bounce Heroes.) Same bundle as above; a Spelunkyish roguelike-platformer. Goblins form the main enemy in the early game; goblin zombies also feature around the same time, but they’re not very visually distinctive (and goblins look weird, right?) so it was 15 minutes before I got the piece of text that identifies them. The trick is that in roguelikelikes all monsters are by default zombie-ish in behaviour and motivation, so unless something has some very clear markers, it’s bloody hard to tell.

Delver, same bundle. Time to zombie: 6 minutes. Initially I thought it might be an orc, being green and all, but its brain-case kept kind of popping off, which seemed questionable; I had to confirm using a guide. (It’s a Minecraft-y huge-pixel kind of thing.) I may have to despair of ever seeing a zombie-free dungeon-crawl – certainly, ‘roguelike dungeon-crawl’ is going on the list next to ‘post-apocalyptic survival’ and ‘any game billed as horror’ as an always-assume-zombies genre.

Road Not Taken, the game I actually wanted out of said bundle, has no zombies and its own distinctive aesthetic, substantially more macabre and morbid; I do not regard these elements as a coincidence. Worth a look. (It’s a sort of puzzly roguelike; I should write more about it at some point.)

Zombie stories are what happens when creativity dies, but doesn't stop moving.

Guilty Pleasures (novel). First in the Anita Blake series, which I felt I should have some familiarity with. Though Anita spends most of her time dealing with vampires, her job title is ‘animator’, i.e. raiser of zombies. But animating is more like Speak With Dead than Raise Dead: you raise a zombie for its individual qualities, not in spite of them or to obliterate them. Zombies evidently have interests, too – Anita is highly concerned with the humane treatment of zombies, and most instances of selfish zombie-raising are portrayed as a kind of abuse. So Anita zombies don’t count as zombies for my purposes.

I read this intermittently, starting way back in last year – Hamilton is not the world’s finest prosaist, and I wanted to like Anita but her internal monologue kept hitting the wrong notes for me, more sarky teenager than weary professional. I dragged my heels, finished it off in the throes of insomnia, and my restless brain didn’t register until right at the end that the ghouls were the actual zombies. Fuck.

Ghouls are more animalistic than mindless. A great deal about them is unknown, and they might have some kind of society; but this is mostly speculation. Certainly they fill the narrative role generally occupied by zombies (undead attack horde who exist to provide threat and then be killed without compunction). 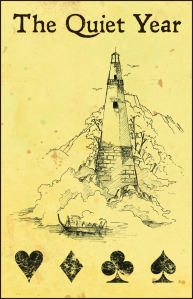 The Quiet Year (narrative tabletop RPG). I was running this for Games on Demand at ECCC. It’s proved a really successful con game in the past: it’s an easy, undemanding entry-point into storygames, has easily-pitched nerd-appeal hooks, and is easily cut down for shorter play sessions. On the last session of the weekend, when I asked my players ‘what kind of post-apocalyptic setting do you want?’ someone responded ‘Zombie cowboys!’ and there was an immediate murmur of agreement. Crap.

When I’m running storygames for new players, I do my best not to take over the story or to squash their ideas. Partly this is because I’m lazy – it’s a lot of work to simultaeneously explain a game and come up with the bulk of its creative effort – but that’s not the real reason. The big, distinctive, fun thing about storygames is how much creative authority it gives the players, and that’s what I really want new arrivals to experience. So it’s unkind, unfair and unproductive to rope novice players into a storygame and then shoot down ideas they’re enthusiastic about; I do my utmost not to do that unless their ideas would break the game.

If this had been a matter of content that I found painful or triggery, there wouldn’t have been a question: we’ve got very strong guidelines for that. But really my problem with zombies is the opposite of a trigger; I’m over-inured, not oversensitive. Nor is my non-zombie preference a conviction so firm and abiding that I could defend treating it as an absolute; this is an experiment, after all, and subjecting other people to your experiments is not good behaviour.

So I let it slide, and just didn’t introduce any zombie elements myself. As it turned out, zombies didn’t end up featuring very strongly – there were just two in the whole game, although it was implied that they were probably responsible for whatever happened to Folks Back East.

Magical Diary: The possibility of animating the dead is raised (Raven, the token goth kid, wants to animate skeletons), but dismissed as a very high-level, multidisciplinary magic. This might be a hint that it’s available as a high-level white/black spell, but I can’t really see where you’d even find a body for the purpose.

What We Do In The Shadows (movie). Vampire comedy from the Flight of the Conchords guys. Zombies are members of the Wellington undead community, and appear in one party scene; but they are capable of speech and social organisation, so Not Proper Zombies.

Rat Queens Volume 1:  Sass and Sorcery (comic). The possibility of zombies vaguely arises (second-string party The Four Daves are tasked with dispatching ‘the restless dead at the Palisade cemetery’) but never manifests.

Harry Giles talked a bit about post-apocalyptic fiction on Twitter (here is the Storify) which brought up a number of worthwhile links, in particular The Running of the Dead. This talks primarily about zombie movies, focusing on the two most influential, Night of the Living Dead and 28 Days Later. I’m a little sceptical about one or two minor points – I’d say that 28 Days Later pulls a switcheroo only insofar as it sticks closely to a well-established genre script. (Indeed, I’d say the key distinction between an apocalyptic story and a disaster story is that in apocalyptic fiction the protection of established order can no longer be relied upon, while in a disaster story the point is to reassure you that established order is robust enough to handle anything.) But overall, a very strong analysis.

So the thing I didn’t talk about last time, the thing which doesn’t quite fit into the last post’s answer to Why Are Zombies Popular Now: the individual zombie, the zombie that isn’t just part of the mob. The close friend or family member who has turned, and who the hero must (with great anguish) put down.

This is not a major element in most zombie games. Relatively few games succeed in generating the level of investment in social bonds necessary to give the trope teeth, but it crops up in a good number of other stories. The TV series of The Walking Dead lingers over that specific anguish with almost pornographic enthusiasm. (Telltale’s The Walking Dead goes for the trope in S1E1 and briefly in E5, but neither case really delivers the emotional gut-punch the scene requires; it’s hard to evoke a zombie’s former humanity in a game, where all the characters are simulacra and the art might not succeed in linking a character to their own corpse. It’s most potent in TWD when it’s a threat, a thing which will happen and must be pre-empted – Larry, Duck, Lee.)

Everything about the way this kind of scene is usually portrayed suggests that it’s intended as catharsis. There’s a political aspect, perhaps – it’s in the same post-9/11 bag as the torture scene, the Awful Thing That Must Be Done. You can read it as a logical extension of survivalist pessimism – anyone who threatens your survival must be killed, even those you love – but I think that there’s something more specific going on here. I think that, in this case, the threat to survival is more excuse than it is motivation.

I’m kind of assuming that the audience is basically Lilly, here.

Even the best relationships will, at some point, involve some degree of conflict and pain. (What child hasn’t, at some point, wished their parents were dead?) But this is, generally speaking, not an urge that’s easy to show in mainstream media, which is tasked with enshrining the narrative that Family Is The Most Important Thing. Rejecting one’s family is a narrative taboo, one that takes a very strong justification to overcome. Love, especially familial love, is frequently shown as trumping everything short of physical abuse. I have friends who have cut off family members who were consistently manipulative, cruel and self-centred; there are not a lot of stories to justify that kind of choice. I have friends who would like to, but can’t. I have friends who, on sober consideration, don’t really want to, but sure as hell feel like it an awful lot.

And, honestly, that’s OK; a certain amount of escapist fantasy can be healthy, as long as we mind what we need it for and what we bring back from it. I personally always find the trope kind of uncomfortable – they’re scratching an itch that I don’t have, and watching someone else’s escapism generally feels a bit gross – but the tacit acknowledgement of a taboo emotional need seems important.

This entry was posted in rpg, storygames, videogames and tagged a wizard's lizard, a year without zombies, delver, magical diary, road not taken, roguelike, the quiet year, the walking dead, vertical drop heroes. Bookmark the permalink.

6 Responses to A Year Without Zombies 4: April Is The Ghoulest Month