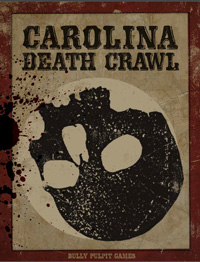 Carolina Death Crawl is a tabletop storygame (one-shot, light mechanics, no prep, no GM) set in the American Civil War, and made by Jason Morningstar / Bully Pulpit Games, better-known for storygames-bestriding giant Fiasco. (The rules are available as a free PDF download, but to play you need a set of custom cards.)

Players take on the role of a small band of Union soldiers, detached from their unit after a raid and struggling back through the creepy, war-torn swamps of coastal North Carolina. There is a distinct risk of bad Southern accents. As with Fiasco, the characters are a desperate, guilty bunch; they’re locals, Southerners fighting for the North, and probably know a lot of the people they’re raiding. Players are mandated, four times in the intro and then in each of their own scenes, to either kill someone, shame themselves or their unit, or destroy something valuable or important. The plot arc is an ever-tightening screw, a descent into hell.

The card-drawing mechanic makes it clear that these are not characters with one or two transgressions under their belt; they are soaked in the guilt of war. By the end of the intro, each character will have done four awful things (kill, disgrace, destroy), and each must commit at least one more in each of the three acts. Assuming they survive that long.

Only one of the group will make it out alive: the others die one by one and become swamp ghosts, creating uncanny situations and punishing their former comrades for their crimes. There’s a mildly competitive element here; introducing story content from drawn cards gives you points, which are kept hidden until the end of each round, at which point the player with the fewest points dies somehow. Dead characters aren’t allowed to sit at the table; they stand, hovering over shoulders, sneaking off to confer.

I’m in two minds about this mechanic, really. It’s cool that you’re offered an incentive to push certain elements into the story, and the hidden-information and conflict matches up well with the distrust of the scenario; but it can produce some decidedly sub-optimal results. Our group had two players who were really enthusiastic about the prospect of playing swamp ghosts, but the first death ended up going to someone decidedly less comfortable with the role.

The group I played with contained a couple of novice storygamers, and they struggled quite a bit; I would not classify this as an intro storygame at all. There are a lot of demands on the player without a great deal of corresponding structure. The swamp ghost role, for instance, is an antagonist, a role which appears in a lot of storygames and can be really narratively powerful when used effectively. Many of those games, however, offer rather more concrete methods for how antagonism should work; Polaris in particular is very good for training the skills of a good antagonist. Carolina Death Crawl sort of assumes that you’re already pretty familiar with how this works:

The job of the Swamp Ghosts is to compel the
survivors to reflect on the horrors and atrocities in their
past and guide them into an unspeakable future.

Cool objective, yes, but as guidance it’s a bit vague; there’s a big difference between ‘here’s the effect you should accomplish’ and ‘here’s how to get that effect,’ and a lot of RPG design tends to overlook this.

Again, the game says that you don’t need any historical knowledge, but I got the distinct sense that the players would have been more confident if they’d had a firmer grounding either in Civil War history or Southern Gothic fiction. The content is almost entirely delivered on cards, which are terse and evocative but – in some cases – didn’t really seem to give the players enough to feel confident about their situation.

Our game ran a little long, and we had to condense the second and third acts; it seems likely that the setup would go a little quicker if I was more familiar with the rules, but my guess is that it would take some really efficient players to finish this in the advertised three hours. One problem was that scenes often got kind of bogged down: there’s no clear mechanic for when a scene should end. I suspect that a big reason why Microscope and Fiasco produce relatively consistent games is that they have simple, decisive mechanics for this.

This still feels like a potentially awesome game, and one I’d like to try again – but I’d caution novices against it.

This entry was posted in review, storygames. Bookmark the permalink.