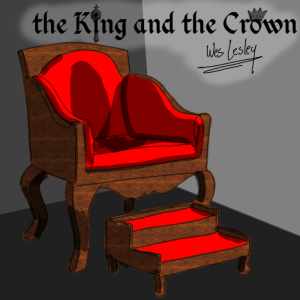 The King and the Crown (Wes Lesley) is a very short one-room game, mostly concerning the traditional parser activity of searching the scenery for hidden stuff. The tone is self-consciously goofy medieval fantasy, light-hearted but a bit too stale to be funny: you are the king, equipped with bunny slippers and a mug of coffee, and you need to find your crown and sceptre in order to hold court.

After finding the items and completing the ostensible goal of the game, play ends – and it turns out to have all been a dream. But the ending explains that there are, in fact, hidden points to find, which will allow you to access new endings. It offers a clue to the first one.

This kind of meta-puzzle is not a bad concept: plenty of games rely on learning through replay, in a kind of cycle-and-grow approach. But the content that it’s working with seems pretty slender: both the cod-medieval inner story and the slice-of-life-malaise frame story are pretty boring. And when I found the first secret, it didn’t give the impression that there was very much connecting the game to the story – rather, it felt as though the game was designed like a literal puzzlebox, where everything has to be poked and twisted just to see if it changes anything.

The game makes this even more fiddly to figure out by minimising how much feedback you get from play: the score is only reported at the end of each session. And there’s no UNDO.

Ultimately, I wasn’t motivated enough by the fictional content to get very engaged with the puzzlebox part – particularly since it seemed to be going out of its way to hide the puzzle’s workings, and because there didn’t seem to be any systematic element to the hidden points. Its principal sin is that it’s boring: I say this with some regularity, but if your game has a clever secret buried under its normal action, you really need to give me some additional, immediate incentive to stick around and discover that secret. And ‘there’s something really cool going on under here, I swear’ is not sufficient. (If some trusted third party tells me that something cool is going on underneath, I might stick around a little longer. But you cannot rely on this for a comp game.)

In terms of my level of engagement, this feels like a 3 – but that might be doing a disservice to the game. To my mind, a 3 generally has some glaring deficiencies of craft, basic things that are just broken. And that’s not really the case here: the prose isn’t scintillating , but it delivers information, maintains a tone, doesn’t sabotage its own goals. The implementation isn’t adventurous, but some care has clearly been taken over it; there are a lot of customised behaviours. I don’t think the design works, but it isn’t a failure of the obviously bone-headed kind. So, provisional 4, dependent on field.

This entry was posted in Uncategorized. Bookmark the permalink.