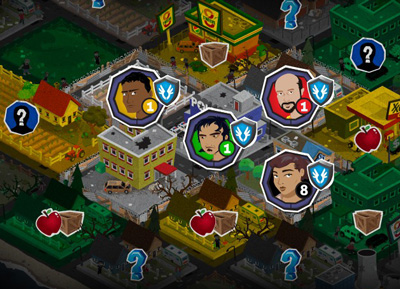 I first encountered the Rebuild series on ArmorGames. Its surface was doing a good job of fitting into the popular YAY ZOMBIES aesthetic: grimdark colour scheme, blood-splatter fonts, post-industrial-soundscape music, gross rotting zombie front and centre in the splash screen. But beneath that, it was something unexpected: a tightly-designed, charming management game, about reclaiming a city and making the best use of survivors. With its tiles and cheerful colours, it bore no small resemblance to a worker-placement board game. Most zombie-apocalypse fare, particularly in that Flash-game niche, tended to be adolescent male libertarian wish-fulfilment about having a fancy gun and a grim survivalist beard, but Rebuild had a sense of humour and of the importance of community effort. The zombies were never the focus; they might as well have been triffids.

I was very pleased to hear that Sarah Northway was expanding the thing into a paid release, Rebuild 3: Gangs of Deadsville. I had to put off playing it for a while, since it released while I was abstaining from zombie media, but it was the first thing I sought out after I was done.

Gangs adds a lot to the baseline of Rebuild 2: a story campaign, a more unified art style, bigger maps, diary entries for your characters, rival factions who compete with you for territory, more random events and mini-plotlines, and so on. But, while it has more professional gloss and a great deal more content than its predecessors, I didn’t really feel that this ended up as a net positive for either the core gameplay or themes – and in some ways undercut both.

The really big change from earlier versions are those rival factions – you can either obliterate them by conquering all their territory, or build alliances with them by doing stuff for them (or just skilled politics). This does add some extra considerations and tactics. Befriending gangs is relatively easy; you cede them territory and send talented leaders to parlay with them. Fighting against them takes a lot of time and effort, tending to devolve into trench warfare; defence is way stronger than attack, so you generally want to defend first, let the enemy waste their forces in offence, and only counterattack when unopposed.  There are no ceasefires; the only way to be safe is to capture all their territory. In other words, fighting humans is just like fighting zombies, only more so.

Aside from gangs, the mechanical gameplay doesn’t grow too much over the course of a campaign: you just go through the same stages over and over. Particularly in bigger cities, this can get grindy. The game does introduce some elaborations as things progress, but this rarely makes for a new kind of challenge. Take bridges, for instance. Initially you’re working on an open grid of a city without much structure or large-scale geography; but then you hit some maps where the city is divided by rivers. Introducing chokepoints should complicate things. But in the end, the rivers make your life easier (fewer borders to defend) without adding much of a problem (rival factions aren’t any good at seizing and defending bridges).

More significant to me, though, was the expansion’s effect on the game’s meaning. The cool thing about the first two Rebuild games was that they tackled post-apocalypse not as a libertarian playground, an opportunity to remake society in your image, or a state of total and crushing despair, but as a challenge to be overcome through communal effort. Rebuild has, at base, a lot of faith in the importance and resilience of society. Your town got fucked up, but you’re taking it back, together.

But by turning it into a town-by-town campaign (leaving the ruins of Seattle, it proceeds through the Pacific Northwest, reclaiming towns as you go), this theme loses its way. Your leader is now a unique, transformational force, not just the first among equals. You’re not taking your hometown back: you’re a colonist. You’re not building a community to live in: you’re popping up franchises, each just a means to a grander end. And that end – uncover the secret conspiracy origin of the zombie plague, research a cure – is way more familiar and way less interesting than figuring out how to reconstruct society. It doesn’t really have anything to say about research or conspiracies – they’re just stock elements – but it now has less to say about community.

Moreover, this seems to have happened not because the author changed her mind about what the game was really about, but through making obvious, straightforward design choices about how to expand the game. What’s the straightforward zombie-apocalypse plot? – find the secret lab that caused it all. What’s the most straightforward way to turn a city-colonising game into a long-arc campaign? – make a series of different cities and have the player-character travel from one to the next. 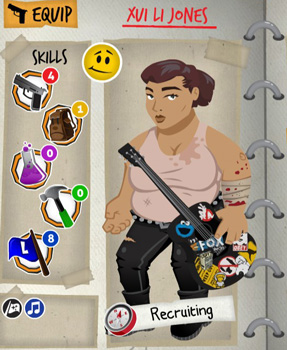 Far from a change of heart, non-trivial elements have been added which seems intended to enrich the sense of community. There are children, who impede the adults assigned to care for them but who grow into highly-skilled adults. As characters level up they share nuggets of scripted backstory with you, giving you the impression that becoming more useful to the community is deeply linked to becoming more open and trusting of it. Characters can become friends, lovers and rivals. This is all potentially kind of cool, even though mechanically it’s very much at the edges of the game. (Gods know it’s understandable not to want to commit to a full-fledged social sim.)

But all of this is severely undercut by the long campaign – because you get mostly new characters in every new town, the number of characters quickly outpaces the content scripted for them, and faces and individual backstories get repeated over and over until they cease to have any individual meaning. This is a game which would have been better if it were shorter.

I understand why it isn’t. Gangs costs somewhat less than dinner and a pint at a brewpub, or a movie ticket. Those experiences, good or bad, would be done in a couple of hours, and would require me to wear pants; videogames, however, are expected to provide tens of hours of diverse play for that price point, which is why the full campaign of Gangs is perhaps forty hours. (As it is, the Steam comments are full of people saying that it’s only worth three bucks because it’s grindy; if it had been a non-grindy fifteen hours, far more of them would be saying it was only worth three bucks because it was too short. If you sold the Taj Mahal on Steam, commenters would find a way to claim that it was only worth three bucks.)

There’s still a lot to like about Rebuild 3! If nothing else, you can avoid the campaign, play a custom city at a reasonable size and get an experience that’s much more like a heavily souped-up Rebuild 2. It’s still got a mild, quirky optimism to the writing. Its characters come in a range of body types and races and have randomly-generated names that sometimes hit the superhero-alter-ego sweet spot and sometimes are just engagingly goofy. I’m more grouchy because, I dunno, there was this great little idiosyncratic game that I loved, and then the authors did a perfectly respectable job of polishing it up into a commercial release, but ‘perfectly respectable’ wasn’t was I was hoping for.

(Also, thanks to the nature of Kickstarter, Meg Jayanth is one of the random characters you can recruit. I don’t know whether she asked that her character be given the backstory where before the zombie apocalypse she was an Internet troll ruining SJWs or if it was just randomly assigned, but that was a weird moment.)

This entry was posted in review, videogames. Bookmark the permalink.