ANCIENT MYSTERIES OF IF COMP: Laid Off from the Synesthesia Factory

ANCIENT MYSTERIES OF IF COMP is my attempt, in the run-up to the 2016 IF Competition, to go back over Comp entries which I missed the first time around. 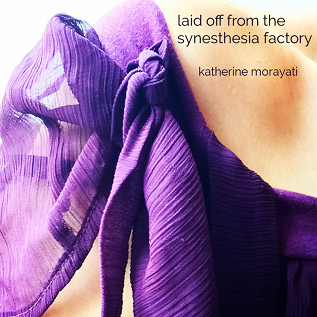 Laid Off From The Synesthesia Factory, by Katherine Morayati, placed 30th of 53 entries in IF Comp 2015; it won the XYZZY Award for Best Use of Innovation, and was nominated for Best Writing and Best Implementation.

The prose of Synfac is a long way from the standard parser style: it’s chewy, dense, sprinkled with unexpected words. It’s not flowy writing. A lot of writing, you already know where the sentence is going as you begin it: this is not that.  It’s writing that’s extremely uninterested in commonplaces, that hurries over extraneous verbiage because it has an awful lot to fit in; it suggests a protagonist who has entirely too many associations with everything in her life, and can’t stop going over them. Sentences are broken up with colons, semicolons, em-dashes; phrases are abbreviated in the manner of bullet-point notes written to oneself.

x me
What you are: A trim, functional paragon of a woman in lifelong battle with a disheveled unraveled omnidirectional grab of a girl.

The contrast here between the curt anapest stab of ‘what you are’, the near-logorrhea of ‘disheveled unraveled omnidirectional’, the return at the end to short cruel words. The use of ‘grab’, the sense of which is completely clear even though the exact meaning isn’t – are you a thing seized, a grab-bag, or the act itself of grabbing these disparate elements together. So, yeah, with writing like this I’m already sold.

The dense expression of complicated things is not invariably quite this transparent, and at the larger scale it’s very much an assembly of fragments, not quite so much bricolage as a collection of notes in the same hand. There’s the feeling of having a very great deal of data and analysis, but nothing resembling a thesis that would pull it all together. To a great extent this is yer basic alienation-of-modernity yearning-for-authenticity piece, and it’s mostly reflected in this lack of guiding purpose in a teeming world: the blind soulless corporate focus-grouping in search of a brand identity, the internet of a million tangents, none of which satisfy

This is basically a story about getting high and fucking someone you probably shouldn’t, the self-care equivalent of thumping a machine to see if that fixes it. Roslyn has been developing a Synpiece, a device which fits in the eye and literally colours emotions. Now she’s been fired from the project, which it’s suggested was largely her brainchild. Defeated, directionless, her thoughts are heavily inflected by emotional exhaustion or non-response, something like when a relative dies and grief fails to show up on the approved schedule. There’s a basic pattern of depression, more socially acceptable in men than women, which goes: this obviously isn’t working, something absolutely has to change, and the only way I can see to effect change is to fuck some things up and see what happens. When your depression isn’t bipolar but you fucking well need a manic upswing anyway and are desperate to find a way to engineer one. Become oversaturated. Often the world does not play along with this plan; Synfac‘s endings are anticlimaxes.

Mechanically, Synfac doesn’t reveal itself. Let’s say you set out to write this game according to route-1 design. Premise: there’s a device that allows you to alter your mood through use of colours. Immediate suggestion: the game verbs are colours, and their effect is to alter the protagonist’s mood, perhaps making her behave differently. UI: convey this to the player and get them to internalise what each colour means, probably bootstrapping on existing cultural associations, so red is anger, blue is sadness, all the levers are labelled and you have some idea of what they should do. Synfac mentions – but doesn’t fully lay out – a system like this, but this text is easily-missed. It has no intention of being a game of neatly-labeled levers.

The vaunted feature of the game is that the action will progress no matter what you do; your input might affect the course of the action, or it might just trigger certain thoughts, or it might not have any very clear effect and Roslyn will think about something or do something anyway. You’ll end up leaving the house whether you mean to or not. (More contrasts: the teeming multifarious world and the very few real choices it genuinely offers. There are only four places in the country where there are jobs in your field, and none presently have anything for someone of your specialisations. There are two boys available, neither of whom have what you need right now.) This encourages a certain amount of tea-leaf reading on the first playthrough, a tendency to overestimate the secret magic of how the game is understanding your input. (One of the Synpiece peripherals is basically a sentiment-analysis panopticon.) I am not sure that it would have worked in a piece very much longer; I don’t think it needs to.

It comes with a soundtrack, which is very tonally consistent, to the point of being on-the-nose: soft-voiced women singing about emotional isolation, music soft enough to form a background while playing a text game that requires close attention to words, gentle touches of electronica. More than one of the songs is about women who love robots – Ladytron’s Deep Blue is about a computer who won’t commit.

This entry was posted in Uncategorized. Bookmark the permalink.