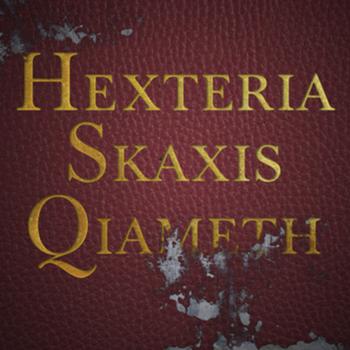 It’s extremely Borgesian, so much so that it’s really best thought of as Borges fanfic. It’s quite good Borges fanfic, with a good ear for the basic tone, and I obviously have a prejudice for Borges.

It’s a piece about language, and the immediate gimmick is that whenever a proper name is introduced into the text, you’re given the opportunity to shape it by clicking through potential syllables – which means you can pick the ones which sound good to you, and have your brain hook onto them and remember them when they’re used later on. This device gets parlayed into a (very small) puzzle towards the game’s end, in which a word has to be composed out of the symbols for its three composite concepts.

The presentation is simple but attractive, with nice font and colour choices. At one point symbols from a fictional syllabary appear, and they feel just right – the sort of thing that might actually exist and have its own orthography, but not obviously related to anything real-world.

Its central theme is a well-established point about language: that the differing grammars of languages affect how their speakers structure their understanding of the world. It’s a solidly Borgesian point – Borges gets quoted a bunch by people who write about ontology, largely because the Celestial Emporium of Benevolent Knowledge is more interesting than any actual text on ontology.

So this is doing nice hypertext things with a Borgesian story, but it’s not really changing things up a lot on the writing side. It kind of falls a little bit into that particular fanfic mode where you’re so focused on replicating the feel of the original that you don’t really do anything with it – you just want more Sherlock Holmes stories, so you create another Sherlock Holmes story that’s just like existing Sherlock Holmes stories. This is Borges plus an interaction hook; the interaction’s polished and appropriate and gets the player involved, but it doesn’t deepen or transform the text.

The thing it doesn’t get from the Borges-Calvino style: the conjuring-up of a sense of scope so vertiginously expansive that it overflows the fantasy frame and breaks into our world. Unlike Tlön, Hexteria is willing to remain a distant fantasy. And it also doesn’t accomplish the style equivalent, those rare passages where the tone of aesthete-academic melancholy switches up a gear and soars.  Yoon Ha Lee: “What fascinates me about Italo Calvino is that this book, his prose, it’s unbelievable in translation. What the hell is the original Italian like? Does it sublimate off the page with its own incandescence?” It seems churlish to fault a writer for failing to incandesce, I know, but that’s the territory. It’s a lot easier to do fanfic of things that aren’t very good, which call out for improvements.

Procedurality and generated text are very Borgesian, but in large part because of the scope they offer, the sense of potential so vast that it overwhelms. Actual procedural or variable content, in practice, often signals its limits as much as its possibility: for all that it talks about infinity, the flexible syllables of Hexteria suggest a world of a few dozen iterations, readily comprehended.

This entry was posted in cyoa, interactive fiction, review and tagged if comp, IF Comp 2017. Bookmark the permalink.