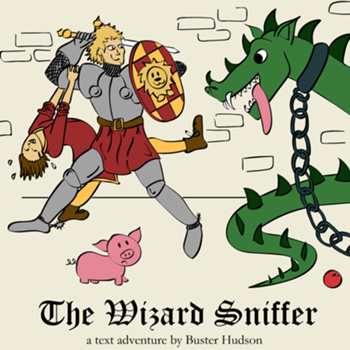 The Wizard Sniffer (Buster Hudson) is an Inform game in which you play a pig guiding a heroic-fantasy Hero. It seems like precisely the kind of game that tends to perform well in the Comp environment: it’s a cheerful and mildly subversive fantasy comedy, of substantial size and solid craft, lightly puzzly with a robust and entertaining hint system.

Goofy comedy is an extremely common mode in parser IF, and goofy comedies in a genre-fantasy setting are near-enough the founding style. There are a lot of games in this vein; some of them are great, but the cumulative effect is a little bit like having a bunch of friends who constantly quote Monty Python and the Holy Grail. But Sniffer is genuinely funny, and less predictable than it looks.

The core premise is that the fool hero is hunting for a shapeshifting wizard, and believes the pig to be able to detect and indicate disguised wizards: so whenever you go somewhere, he assumes you’re following the scent and follows after, and whenever you sniff at something, he tries to kick its ass. This means that you have a huge lunk of a sidekick who constantly attacks things around you. And he also has his own hapless sidekick, to whom he narrates events. It’s very over-the-top; I was immediately put in mind of Lock & Key and of Hudson’s earlier piece Oppositely Opal, but it feels as heavily influenced by old-school slapstick. There’s a great deal of collateral destruction and characters chasing one another around. You can almost hear the foley artist.

It’s got a really strong opening, the kind of thing which declares unambiguously what the author’s setting out to do. It gets you straight into the gags in the first room, and the simple puzzles that show you how this is basically going to work, and lets you figure out the limited parser, and it has a little manifesto bit with that rubbish-dump of bad old puzzles, and the bit that very clearly says HERE IS THE HINT SYSTEM, PLEASE HAVE FUN USING IT. It’s designed to get you fired up about the game and dispel the kind of doubts you’re likely to have about a Goofy Parser Castle Adventure. And it works.

Around the midgame, things begin to sprawl a bit – the map expands, there are a whole bunch of loose threads dangling around, your purpose and motivations get less clear, and more and more elements of wacky chaos spread around the map. You’re creating chaos, but it seems pretty clear that there was a great deal of chaos in place well before you showed up. The protagonist, who at first comes across as a cute critter who wants to help out and just happens to be smarter than their handlers, starts to feel sharper, more manipulative; your relationship to the Brave Hero starts to feel less like a jaded-yet-loyal Jeeves working behind the scenes to help the hero out, and more as though the Brave Hero is a useful pawn. All this encourages you to rely on the hint system, which in turn makes you feel less and less as though you’ve got a handle on proceedings. The brisk pace, hinting and relatively gentle difficulty meant that I sometimes felt as though I’d solved a puzzle without fully understanding what its parameters or consequences were. And I think it’s inherently difficult to sustain this degree of high-energy wackiness throughout a game of this length.

I didn’t end up finishing; it’s kind of long for a single sitting, and I was a prat and didn’t save where I left off, and replaying through to the late mid-game wasn’t happening. Which is a shame, because from all reports things pick up again towards the end. (I have been spoiled on the final twist, but I obviously can’t really speak to it.)

I find myself in the position of having a whole lot of respect for the craft and ambition and smart ideas that have gone into this, while not really being excited about it. Perhaps I just wasn’t in the mood for it. Maybe I’ve seen so many Zany Castle Adventures that I’m burned on them to the extent that I can’t really love one even if it’s pretty well-made; maybe it feels a little too safe. Maybe it’s that I dropped out of it at its slowest point. But… yeah, it was good, I had quite a bit of fun with it, it’s both highly capable and of ambitious scale. But it’s not a game that I’m going to be jabbering about with an enthusiast’s gleam in my eye if someone asks ‘so I missed this year’s comp – what should I check out?’ I play through that conversation in my mind and I hear myself equivocating. And I honestly feel a little sad about that.

This entry was posted in interactive fiction, parser-based, review and tagged if comp, IF Comp 2017. Bookmark the permalink.

2 Responses to IF Comp 2017: The Wizard Sniffer