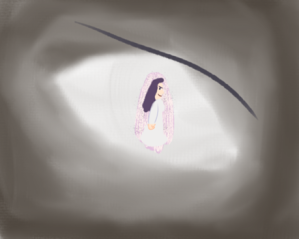 The Shadow Witch (Healy, RPGMaker) is a short game in which you’re a mean witch and go around being a jerk.

I really don’t like RPGMaker. I realise, as an appreciator of parser-based IF, that I don’t have too much ground to hate on a platform designed around a horrible legacy UI, and which hobbyists frequently use for ill-matching ideas for lack of a more suitable platform. But I never imprinted on pixel-arty JPRGs in the first place, and I pretty much never want to deal with them. The Shadow Witch further bothered me by forcing full-screen, making everything huge and blurry and screwing all my windows up and not letting me tab out.

This is a piece of much more focused design than you usually see in RPGMaker, though: there are a small set of rooms, pretty much everything that looks like it should have descriptive text does, and the puzzle arc is simple and compact. You don’t spend any time running across huge areas or engaging in repetitive, grindy combat just because that’s what the platform supports. The character art’s pretty crude, but it’s applied consistently and it isn’t just RPGMaker defaults.

Eliza is a witch who is a jerk and goes about doing evil. (I am not sure if the blurb tagline is a conscious Goose Game reference; it has that general form, and it’s straightforward to read it as a counterargument to the random-mischief play style, but it’s not so clear-cut that I can be sure about it). The game is fairly up-front about its version of ‘evil’ running the gamut from tiny acts of annoyance (spoiling people who are precious about spoilers) to potentially fatal (poisoning an entire roomful of people). Part of the deal is that Eliza doesn’t really see any difference. This is not so much a story about evil in general as it is a story about a particular subset of it, of pranking and trolling: in theory Eliza is doing this because it’s her job, but the text mostly shows it as a thing she does because she finds people insufferable. Eliza isn’t really cruel for any reason other than the lolz, and often seems sort of confused about the idea that her actions have consequence.

The other characters in the world are deeply twee. You want to eat the fairy’s lunch. It’s a sense of the world from a 90s edgy cartoon: everyone’s lame or fake, so the only authentic response is indifference and contempt.

The thing which has lasting repercussions and where the game’s narrator says ‘this is a bit much, even for you’, is intentionally triggering phobias: Eliza sends a spider picture to someone with arachnophobia, and they leave the community. This feels a little weird: under most ethical considerations, that’s bad but doesn’t really match up to ‘putting an unidentified poison in a communal meal.’ But that’s because this game isn’t really concerned with poisonings: it’s concerned with online misbehaviour.

A while later, Eliza helps out a water witch, Elayna. (It’s not entirely clear why Eliza wants to be Elayna’s friend, except that (as far as I could tell) the game only lets you help her. Eliza is still her crabby self, and Elayna does not seem much different than the other insipid NPCs. It’s never really articulated why this is different: there’s a bit where Eliza refuses to interact with Elayna’s bed because ‘it feels kind of intimate’, which suggests that she’s thinking along those lines, but there’s not really enough to go on here.) But the upshot is that a tea-party they’re having is called off because Elayna can’t find a recipe for ladyfingers, because the recipe was on the arachnophobe’s account and was deleted when she left.

So the underlying idea here is sound even if the instance feels really nonsensical: when people are harassed out of communities those communities lose something. And I think this is a convincing portrait of a troll mindset. A lot of things have been sacrificed to keep this story short and thematically focused: the setting doesn’t really hold together at all, the characters are cartoonish, the ethical weight of the literal events is weirdly-proportioned, important elements of the motivations that drive the narrative feel glossed-over. All of that, and the ugly visuals, will probably put off a lot of players. But I think it pulls off the main thing it cares about, which is delivering a compact, playable and psychologically convincing parable.

(Brian Rushton’s review suggests that there’s an alternate plot arc, but I didn’t really have the energy to go and find it. I feel like is an indication that the game needed something more that was immediately enjoyable.)

I think this could have been done a lot better? I think it would have been more rhetorically effective if the mischief had been more fun, for a start; that could have made the whiplash a lot stronger when one of your victims stops being a caricature and speaks frankly to you. And I think that it has definitely lowered the stakes in ways that could make it come off as silly: sending spider pictures is pretty damn mild in the scale of internet harassment, and ‘no tea party for you’ also feels a bit of a damp squib. But I think that the core of this works. That’s a 5 if ever I saw one.

This entry was posted in interactive fiction, review and tagged if comp, IF Comp 2019. Bookmark the permalink.