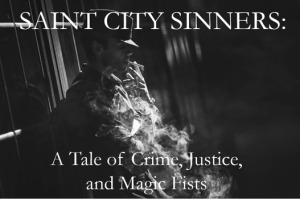 I know some real good writers who just goddamn love Clickventures. I always felt as though they were fine, but the ratio of wackiness to wittiness didn’t always work for me. For me, when you go very high-key wacky, you just need to land a whole lot more jokes – it gives you more ways to land a joke, yes, but you’ve got to keep them coming at a rate fast enough to stave off groans.

That’s how I feel about this, too: there’s a lot of wackiness, and some of it’s funny, but the overall effect wore a little thin for me.

Part of this is because high-key wackiness is understood to supersede the usual value of the plot. There are comedies where plot and character are assumed to matter in their own right, where you’re telling a story that the audience are meant to invest in. And there are comedies, like this one, where plot and character are intended as disposable, important only as an engine of gags – and if you’re sacrificing all that for the sake of funny, you’d better be really funny.

Part of my issue here is that the central recurring joke of the story is the ridiculously overblown hardboiled hero. Jokes about the generic but extreme manliness and virtue of manly virtuous heroes are really commonplace. And the hardboiled noir detective trope has, for at least the past forty years, been primarily encountered through parody and pastiche: I knew Tracer Bullet long before I’d even heard of Philip Marlowe. So the central gag comes a bit pre-worn – and then it doesn’t really go anywhere. A lot of the failure endings are abrupt tone-shift jokes where the ultra-heroic hero goes off-script and therefore out of the story: if the game is to continue then the character has to keep doing the same stuff.

In a conventional mystery, this plot structure – an opening, three suspects to investigate in any order, an end that you can go to whenever you decide you have enough evidence – would have been compact and sensible. But here it feels too long, as though the good material (or, perhaps, my tolerance for goofs) is stretched a bit too thin – and it provides a consistency that the goofs don’t need. The structure is inviting you to take the plot kind of seriously, even while the text is saying you shouldn’t – and this kind of undercuts one of the big advantages of full-blown wackiness, which is that it offers the freedom and surprise of being able to go anywhere, to shift modes before they get too overdone.

(I don’t want to say that this is the only reason, or even the most important reason, why it didn’t work for me as comedy. Comedy is hard to analyse and I am fumbling my way a little bit here, and the things I identify as problems are just the ones I can figure out and say something useful about! Which might not be the most important ones.)

To be clear: there are funny bits here, and the command of basic narrative delivery and structure is pretty good. Even when it’s not hilarious, the writing has flow and enthusiasm that kept me going. And it’s making design decisions that would be very sensible for another mode of writing! So I think that we’re very likely to see good things from this author in future.

There’s some pretty nice presentation: an apropos soundtrack, a suitable background, a good density of paragraphs. It’s not super-slick or technically astonishing, but it demonstrates thought and care and it makes the game feel more squared-away.

This entry was posted in cyoa, interactive fiction, review and tagged if comp, IF Comp 2019. Bookmark the permalink.