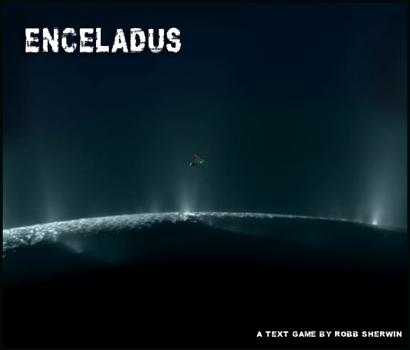 Enceladus (Robb Sherwin, Hugo) is a madcap action-adventure parser game where the crew of a grimy spaceship tangle with an old rival and have to put down on a backwater moon.

If you’ve ever played a Robb Sherwin game, you’ll be unsurprised that it’s a combination of dedicated production values and outright jank, of goofy antics and splattery gore and moments of heartfelt vulnerability; that there’s a soundtrack and it’s kind of a banger; that it has a cast of wisecracking misfits. You don’t spend any time in the skeezy corners of America’s decaying midriff, but you get the space equivalent.

Robb’s best-known games, Fallacy of Dawn, Necrotic Drift and Cryptozookeeper are all big, ambitious works, too big for the Comp. This is a game of more confined ambitions. The plot is still action-adventure with an ensemble cast, but the player-character is a follower rather than a leader, there isn’t a combat system or a lot of illustrations, and the gameplay style is a lot more focused on forwards momentum than on challenge. You spend most of the time being told what the next thing is to do and then doing it.

There are parser authors who are real masters of the forwards-momentum style of play, folks like CEJ Pacian or Ryan Veeder, who can make damn sure that you’re always pressing forwards and have a firm idea of the next step. This is not that, exactly: I wasn’t always 100% confident about where the action was meant to be going next or why, possibly because I was distracted by the upbeat electronica and missed an important line somewhere. That said, I didn’t ever have to even really think about going for a walkthrough: rather, there were some moments where it felt like I was thumping the case of the game to make it work. But it always did get working again after a vigorous enough thumping.

The implementation is a bit scanty: lots of scenery details are missing. You carry around a gun for most of the plot, but if you shoot it at anything but the right thing and at the plot-decreed moment then you’ll get the same response. The way room descriptions are organised is often, again, kinda janky, to the point where I was sometimes a little confused because the same thing got mentioned twice in different ways. But this doesn’t get in the way of things.

I’m not sure that it 100% nailed the sense of camaraderie that it’s aiming at – one that’s at the emotional heart of most of Robb’s games. A lot of how he’s developed that in the past relies on having time to hang out with and get to know the characters, not necessarily through direct interaction but just by being around them and letting them reveal themselves. It doesn’t feel as though there was quite enough time for that here – certainly not enough for every character to get a spotlight moment.

The shift in player agency affects how the protagonist relates to the rest of the cast, too: rather than being the social glue that holds the group together, Ja’Rod is a bit peripheral at the story’s outset. He’s doesn’t really have long-established, close relationships with anyone in the group, so there’s less existing material to build on, and he’s young and socially awkward in a crew of big, tough personalities. (He’s plainly got a bit of a hero-worship crush on the Captain, and frankly I’m OK that this doesn’t ever become a thing that needs to be addressed.) The emotional arc is from a state where you’re at the edges of the group to one where you’ve proven yourself and are included and valued.

It’s got a lot of the elements of that arc in place, but I felt as though the crucial part – the scene in the mine where the Captain opens up to you about her husband’s death – felt abrupt, as if I hadn’t earned it. And technically speaking by this point we’ve been through, what, two or three major incidents together. Maybe it’s that I spent those incidents doing as I was told, and the one time I took the initiative I made myself look like a gigantic idiot even though it technically got the job done? Maybe it’s that this has been a pretty asymmetric relationship up to this point. Maybe, I dunno, showing character relationships evolve is a tough task for any writer and it doesn’t always work out. Maybe it was the music. But regardless, this scene is obviously the keystone of the game’s emotional arc and it didn’t. quite. do it for me.

All that said: this is still a pretty good time! It’s got funny lines, it cares a lot about distinct character, it’s never predictable or dull. I’d call it a 7.

This entry was posted in cyoa, parser-based, review and tagged if comp, IF Comp 2019. Bookmark the permalink.