80 Days: The Map Is The Territory

Hwaet. 80 Days. I have a number of things that I want to talk about; firstly, how freaking well it handles structure and player knowledge.

Choice-based narratives tend to be organised in one of two ways. Either the branching structure represents the passage of time, or it represents travel in physical space. Space-based organisation is the more recent and uncommon arrangement.

Like many physical-space CYOAs, 80 Days has the kind of structure that I think of as a quest: it begins at a single point (London) and then branches out across a wide range of territory, before the strands ultimately rejoin at a single ending (also London). While there are some local bottlenecks, there are no mandatory nodes between the game’s opening and close. Most nodes offer > 2 options, and rejoining is very common but relatively conservative, mostly taking you back to the closer neighbours in the tree. Some routes can be traveled in either direction – not enough that you can elect to circumnavigate entirely westwards, but often involving a little westward backtracking to get to a desired point. 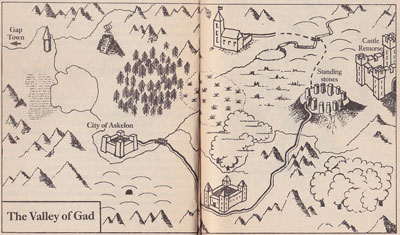 It’s not hard to see where this comes from: it’s a development from inkle’s savvy adaptation of Sorcery. A lot of RPG-influenced gamebooks, like fantasy novels, start with a map of the area in which they take place; in many cases, having some idea of the land you’ll be traversing is useful information. In some, like the Duelmaster books, getting a sense of where you are on the map is everything. The chain of inheritance goes back to old-school, heavily map-based RPGs in which the map of the dungeon formed the immediate structure of the narrative, and thence to Tolkien. (Come to think of it, Lord of the Rings is also a geography-organised story that starts at a single point, then branches widely across the landscape before reconverging.) Even those which didn’t have maps, or which took place almost entirely within a single point on the map, the layout of the game was often fundamentally one of geography*. The journey is the plot. The map is the story.

In paper gamebooks, this was always awkward to actually use during play: it was yet another place to keep with your finger, and the maps were intentionally imprecise, mapping the general layout of th 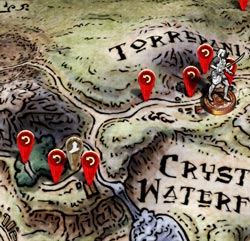 e world but not directly showing how that corresponded to positions and options within the game. inkle’s slick, savvy iOS adaptation of Sorcery very sensibly acknowledged that the map and the plot structure were near enough the same thing, and tied them together more explicitly, using the map as a frame for the text events and a convenient way to rewind your story to an earlier point. The visibility of the map makes it easier for the player to have a grasp of where they are in the story, to locate their present situation relative to their past actions while suggesting what lies ahead. This is particularly crucial in choice-based formats, where it’s easy to feel disconnected from a narrative that’s plunging on regardless of one’s grasp on it. 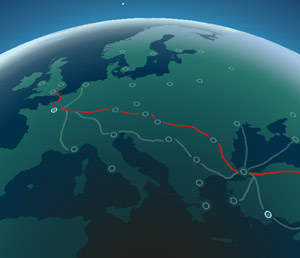 But Tolkien-descended fantasy maps have their limits. Unless you’ve already consumed a lot of stories set in the world in question, the map is just a pile of details that you have no associations with, a great big dump of no-context information. There are ways to ameliorate this – use over-the-top evocative names, crib heavily from real-world geography – but they don’t fix the central problem. Unless I’m already intimately familiar with the world in question, I don’t really have any feelings about going left rather than right at Gna’ash. So a well-known, real-world map has strong advantages – and a map of the world is damn-near perfect. 80 Days is, therefore, an inherently awesome premise for a choice-based story, because it comes pre-loaded with both a structure and a vast pile of context. We already know some stuff about this world. You already have some ideas about whether you’d like to visit Venice or Japan.

(It’s also worth pointing out that 80 Days is unusually large by gamebook standards. There are 144 cities – but really every city, and every route between cities, is not so much a node as a bundle of nodes, a lot of them state-dependent.)

The 80 Days map is a lot more explicit than the Sorcery map. Sorcery is merely retrospective; you know where you’ve been, but where you might go next is at best a guess, and long-range planning impossible. The map doesn’t show lines, just nodes. In 80 Days, the map is criss-crossed with reassuringly solid lines connecting firmly to city nodes. (A route-map, conveniently, is a diagram of a choice-based decision tree which everybody already knows how to interpret; unlike, say, the conversation tree in Alabaster or the GUI map of a modestly complicated Twine game, the player doesn’t need a tutorial or extensive annotation to know what it all means). This makes sense thematically: Fogg and Passepartout are not explorers, wanderers in a wilderness or pioneers on a frontier. The premise of Fogg’s wager is that the planet is known and developed; a central theme of the book is that discovery and wonder remain possible even in a world with no more Great Frontiers. But the thematic consistency is as nothing before its effect on player knowledge and gameplay.

The world map in 80 Days gives you a general sense of where you’re going, what that is and what that might lead to, but it has the luxury of not having to spell it out. If you head south to Nice rather than east to Cologne, you can infer that your next step is probably sailing the Mediterranean, and you can immediately see that this route brings you closer to Africa – but you might also be thinking about the difficulty of crossing the Sahara, or questioning the wisdom of heading far south on an eastbound voyage. You’ve got a lot of potential material to be thinking about beyond the simple dots and lines of the game itself – and when the knowledge you have does match up with the game-world, the sense of connection strengthens. (This is only one of the levels at which it relies on being a twice-told tale. More anon.)

The result is something that’s very well balanced between the ability to plan and the possibility of luck and unforseen opportunity – and a big part of what makes this possible is the pre-estabished sense of investment and connection with the map. But it doesn’t just assume that familiarity – it actively builds on and fosters it, revealing the existence of some routes well before they become useful, making conversations leap off to far-away places. You’ll probably be anticipating the Pacific crossing long before you reach a Pacific port. There’s a tangible sense of loss when you abandon plans – ‘oh, well, I suppose I don’t get to see Port-au-prince this time around’ – that motivates replay, but changing your plans is something you will want to do. You can predict some of what’s coming, and this is genuinely useful to you, but not so much as to make the game a tedious exercise in deterministic optimisation.

This is largely because of the route-discovery mechanic. All the cities on the map are revealed from the outset, but virtually all routes between them start out hidden. Unlocking routes is very, very common: there are multiple ways to do it, most of which occur regularly and often. But while there are predictable ways to unlock routes in general, you have imperfect control over which routes unlock – they tend to be routes useful to you in the near- to mid-future, but a good deal of chance is involved. You can infer that certain routes are likely – that strand of cities extending across Russia has to be connected – but that doesn’t mean that they’ll become available. Some routes can only be revealed by specific story content. Some will just randomly not get revealed unless you want to waste time searching for them. Further, even when you know about a route’s existence, you don’t know many things – how fast, onerous and expensive it is, how long you’ll have to wait for departure, whether you can negotiate that departure – until you reach the city from which it begins.

This is more complicated to describe than it is to play. Your actual options at any one time are kept to a manageable few, and the moderate predictability means that detailed long-range planning gives diminishing returns. So you’re encouraged to plan softly, even intuitively, and not worry about it too much.

In many simulation-y games, the most fun happens somewhere along the midway point of the learning curve, where you understand enough about the game to be able to plan and execute experiments, but not so much that you’re certain about everything. The real-world map and pre-mapped routes push that middle zone to a considerably earlier point (right from the outset you’re able to form vague plans) while the random elements extend it to later in the knowledge-curve (even when you know a lot about the routes from past experience, you may not get to use the ones you want.) That sweet spot, at which the player can grasp the world but does not rule it, is a huge part of why 80 Days is so fun and compelling.

This entry was posted in cyoa, videogames and tagged 80 Days, inkle, map. Bookmark the permalink.

2 Responses to 80 Days: The Map Is The Territory