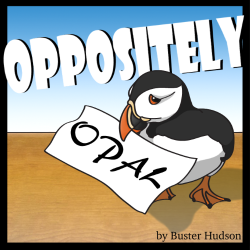 Story: The PC, Opal, is a witch who has been trapped by her rival Grusilda in an Icelandic cabin for the crime of befriending a human, Aurora. To further disable her, Grusilda has set up a curse that reverses all of Opal’s spells. The curse doesn’t affect potions, however, and Opal is great at potions, so the unifying goal is to collect ingredients for a potion that will fix everything.

Much of the backstory is delivered in flashbacks upon solving puzzles. There’s a debt to Wicked here that goes deeper than the naming style: the background is that witches are a reviled group who have embraced the nastiness that’s expected of them. In particular, I think we’re talking about the tendency of marginalised groups to create orthodoxies of opposition that are marginalising in their own right; Twice as Good is also invoked, and it seems likely that Opal is going to get it from both sides for wanting to be something that doesn’t fit in with either group’s narrative.

Opal’s shift from overly-earnest Super-Witchy to something more mixed is where the game begins to feel most like a children’s story. The tone is fairly light – although witches revel in their So Evil nature, it’s a very PG kind of evil; you can capture, menace and randomly experiment on a pixie and it’ll turn around and be your friend by the final act, and this is not a big thing. (You could read this as a game aimed at children, which might explain it.) This lightness is probably a signal that interpreting the metaphor too far is ill-advised, but – y’know what, I’ll take this thread up when I review the next game.

Writing: Aims for ‘charmingly goofy’ here, and doesn’t do a bad job of it; I didn’t ever break out into laughter, but there were a sufficiency of pleased smirks. It does a pretty good job of expressing Opal’s enthusiasms – a problem I often see with parser writing is the PC who appears wholly unmoved by events which really should affect them, and that is absolutely not a problem here. There’s a lot of emoting-on-the-Internet vernacular. I can see how this might get old pretty fast for some readers, but it worked for me in large part because Opal’s enthusiasm kicked in right as I was pleased for figuring things out – in a game with less satisfying puzzles it would have been a good deal less effective.

The writing didn’t hold up for me quite as well when it got more serious: Aurora never quite coalesced as a person rather than an object of Opal’s affection, for instance.

You remember the first potion you ever brewed, back when you were a mere witch girl. You were living in a human neighborhood, where other children would pick on you and make fun of your stringy hair and weird skin.

It was Grusilda who came to your rescue. She was a few years older and always knew how to be a proper witch. The first time you met, she took you to her place and taught you to brew a stink potion. Handing you the freshly capped bottle, she said that humans would never like you, but they could fear you.

Like, this is fine, I guess, but it doesn’t have the spark of the main action; it has a generic, stock-Hollywood feel to it, without the flavourful detail that animates the rest of the writing. And formative memories ought to be potent stuff – they’re not reinforced by play yet they should feel as though they matter deeply to the PC. So the writing here really needs to be on point.

I think this is a 4 – strong at comedy, but needs work on the less comic elements.

Puzzles: This is a one-room spellcasting-puzzlebox game along the lines of Suveh Nux. The difference is that Suveh Nux feels like a tightly-crafted, unified sequence, whereas Oppositely Opal is a big messy sprawl of relatively isolated tricks. This is not quite as true as it seems – many of the puzzles follow in sequence from one another – but overall there’s the sense of lots of little mini-puzzles piled up in a heap, which means that you generally have a lot of stuff you could be working on.

The unifying mechanic is that the spells all do the opposite of what their descriptions say, which adds an extra twist to each train of thought. This adds a surprising amount of ingenuity to the solutions – surprising because it feels as if that step should be trivial, mechanical busy-work, but evidently inversions involve more imagination than that.

Also worth noting: puzzles that are basically ‘mess around, break things, cause all kinds of trouble’ are a lot of fun, because they make good on the do-whatever-you-want promise of the parser. The basic sense is that an active witch is a cornucopia of chaos, making things smell bad, setting them on fire, wrecking the furniture, bringing taxidermy to life – and one of the things I particularly treasure about the listy nature of parser games is how they can generate a sense of overflowing abundance, of Many Things.

There’s an in-fiction hint system, which is rather restricted: it only focuses on one puzzle at a time, and can be kind of imprecise. This actually worked out fairly well for me, because a somewhat-obscure hint left at least one significant puzzle still feeling like enough of a puzzle to be satisfying when I got it.

I think this is a 5. If this was a more finely-graduated scale, I might find reasons to knock a point or two off  – there are too many spells to remember all their names easily, and I had to constantly relist them – but it’s fun, fair, and ties in pretty strongly to the character of witches as chaotic mischief-makers.

Theme: The final puzzle requires sunlight, but this has to be faked by other means. It fits in with the game as a whole, but I’d call it a minor detail rather than a significant element. 2.

Technical: The game is basically about combining spells with items, and there’s a relatively long list of each; a few spells fizzle when they really should have some result – anything wooden should be able to be brought back to life, right? – but for the most part it does remarkably well.

One of the things worth noting is that, for a one-room puzzle game, the setting undergoes some pretty major changes: you restore power, generate a couple of significant NPCs, set off a volcano and create a bloody great hole in the roof, summon an antagonist – and the implementation generally held up to all this pretty well. (The one thing I noticed was that some of the fairy’s messages didn’t quite make sense if she was human-sized.) I think this is a 4  – impressive, but some way short of mastery.

This entry was posted in interactive fiction, parser-based, review and tagged parsercomp. Bookmark the permalink.